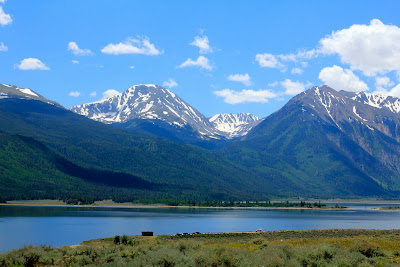 6 weeks since the Jemez 50 Miler in New Mexico, and things weren't looking too bright for my immediate running future. Remember that heel pain I was complaining about during my last race report? You know, the pain from the overly-aggressive trashcan that ran over my foot? Well, it was a lot worse than I had anticipated.

Immediately after Jemez I sat my happy but on the couch for a bit, giving myself some much deserved down time. After a week I tried squeezing in a 5 mile run, but limped home in pain. I repeated this process for a couple of weeks, and finally realized I was screwed and absolutely could not run. It wasn't the running that was the problem, it was wearing shoes that did me in. Anything that rubbed against the back of my heel caused an intense pain that wouldn't abate. I saw an Ortho who gave me a silicon pad thingy to place over the sore spot. When that didn't work, he referred me to an awesome Chiropractor who performed ART and electrotherapy. 4 session and $$$ later, I was feeling much better.
To stay somewhat active Bryan convinced me to go to Muay Thai practice, which I admit is rather fun (for those who don't know, Muay Thai is in essence, Thai kickboxing...only legit- not like the crap classes they offer at LA Boxing). I had no idea I would enjoy kicking things so much (often times the recipient is Bryan). It's a great workout that is non-stop cardio with a lot of intensity. While I have no plans of ever being a Muay Thai fighter, I definitely am enjoying myself on the mat. Annnyways, back to running.
I was able to run 5 miles 5 days in a row after a week of ART sessions, though the heel was still not quite better. It turns out I ruptured my bursa (a fluid-filled sac that protects the Achilles tendon), and consequently there was nothing protecting the tendon from the pressure of my shoe. To be clear, I did not injure my AT...but it probably could've reached that point had I left it untreated much longer).
The family headed out to Colorado a week before the race to start our awesome vacation. We hiked, biked, drank, spent way too much time in the hot tub...it was fabulous. I had a scare with my heel after a slow 5 mile trudge at 9,000ft elevation, but after a quick ice massage it seemed to be a little better. At this point I was still debating whether I should run the marathon or not...
Run a marathon off of 63 total miles in the past 6 weeks of "training"? Or more importantly, run a marathon with the potential of re-aggravating my heel? 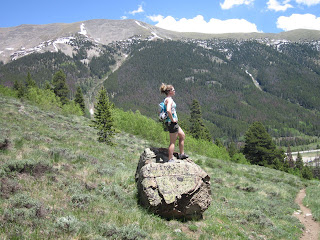 Leading up to Saturday, the signs of injury continued to diminish. I decided on Thursday that I should definitely run the race, though I certainly wouldn't be racing. I was somewhat frustrated as I had originally hoped to beat my time from last year (5:18), which I felt I was setup to do after the past few months of racing. 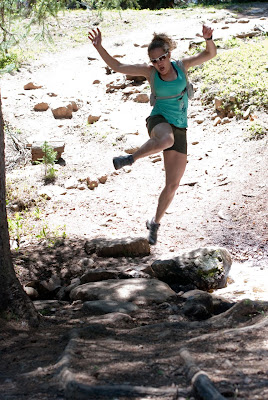 On Wed. afternoon Bryan and I drove through Leadville on our way to Aspen. I stopped in the Leadville 100 shop to finally pick up my award from last year (a sweet gold mining pan thingy). We were greeted by a barrage of packet-stuffing fury, so we stuck around to help stuff the race bags until we ran out of supplies. We stopped at the store again on Friday to actually pick up my bib, which was one to many trips to Leadville for Bryan =)
Anywhoo, on to the race...which is the only reason you're reading this anyways.
Saturday, July 2nd:
My usual partner in crime, Matt, flew out from VA to join me on another epic mountain adventure. This would be his first race at altitude, and his first ever trip to Colorado. I absolutely love sharing the mountains with people (but not too many, can't be crowding my mountain) so I was excited to have him along.
We stayed up late the night before eating and drinking wine, watching a little Archer, and talking about everything but the race. Finally around 11pm I decided to get my crap together and get ready for bed. For those who are new to marathons (or have yet to run a marathon), you can definitely get to the point where you don't flip out before every race. Only some races ;)
Saturday morning we hit the road for the scenic 40 minute drive to Leadville. We were staying in Frisco, which is my home away from home away from home (not sure how many homes removed it is). The logistics for this race are heavenly. We pulled in to a parking lot directly in front of the start/finish area and headed in to the high school gym to do the leap frog bathroom line (go to the bathroom, get in the back of the line again, repeat until the start of the race). I was tickled to meet a woman (Donna) who recognized me from last year's Leadville race report on my blog. She was nervous about her first Leadville--hope you had a great time, D!

I performed the usual bodyglide/sunscreen ritual and placed a completely inadequate bandage over the sad spot on my heel for a token placebo effect. After stuffing my new favorite thing ever (Nathan Intensity Pack) with all of my other new favorite things (Cliff Shots- Vanilla flavored, Honey Stinger waffles, Honey Stinger strawberry chews, and of course...Fig Newtons), I felt confident that I would not be lacking in the nutrition department.
So, instead of writing a typical super long-worded race report, I'm going to fill the page with photos taken throughout the race. Since I wasn't really racing, it's better this way...ehh?

The race starts off with about a mile uphill on a paved road, and the climb continues from there through mile 5. By far the quietest part of the race, with everyone figuring out their groove (and whether they feel like socializing with the other runners). Matt and I took it pretty easy, trying to adjust to the altitude without completely destroying our chances of finishing in remotely good shape. 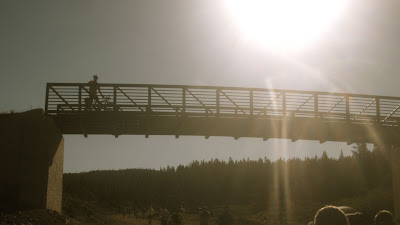 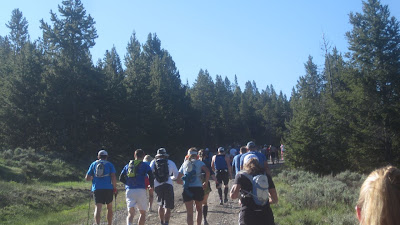 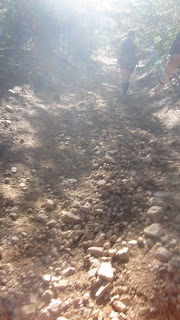 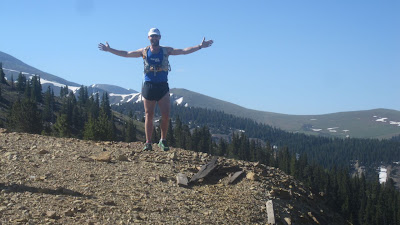 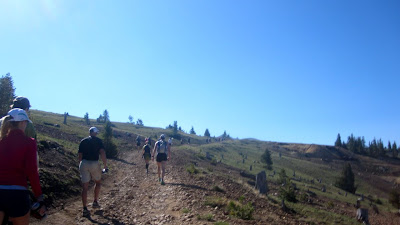 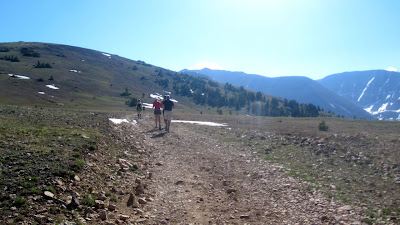 Before long, we made it to my absolute favorite part of the race (the base of Ball Mountain--which peaks at 12,000 ft). I mean, c'mon...look at these views! I still feel it's lacking a moose or something. 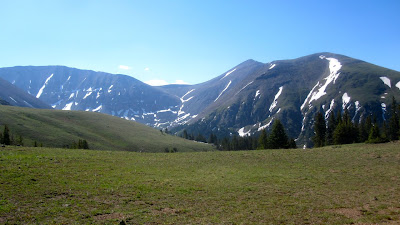 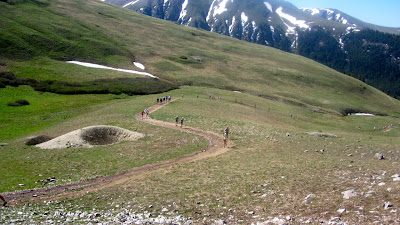 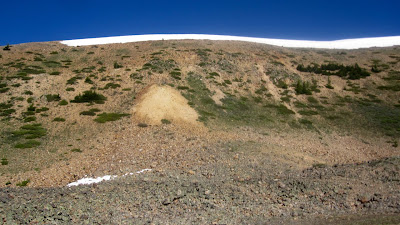 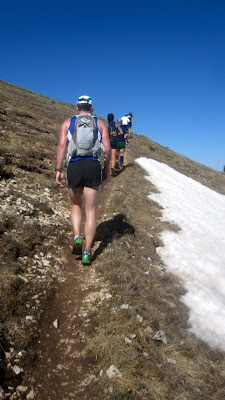