That was actually a typo, but it made me chuckle so I kept it.


Warning: This post may contain extremely happy and positive content.
To understand a bit about Promise Land, you must first get an idea of the race director (Dr. David Horton) and the notoriously difficult races he puts on throughout the year. His legendary status in the ultra community combined with his Walter Matthau-hold-nothing-back persona draw a large, fun crowd at this annual  (debatably) 50k event. As my first Horton race, I came in to this with the fear and trepidation of a 3-legged gazelle hobbling through a lion’s pride. I’d heard Promise Land was a hard race, in part because the distance is actually 34 miles but mainly because of the total amount of elevation gain (8,000ish feet). I really had no idea what would happen to me in such a long race, but I could only hope that I was prepared.
Friday afternoon I met up with 3 other runners (Keith, Ragan, & Sean) for the 3-4 hour drive out to Jefferson National Forest. Keith and Ragan are really well known in the ultra community, with a lot of impressive accomplishments to show for their years of experience. Sean is a baby runner…22 years old with one year of running under his belt (with a 2:52 marathon…lol), and was more excited than Dakota eating a 32 oz jar of peanut butter when mommy leaves one sitting on the counter.
Our plan was to camp out at the race site with all of the other runners coming out for the Horton experience. Somehow we managed to cram most of my camping gear in the car (minus my pillow…sad face), but most importantly I managed to barricade myself in with bags of food. Ultra runners shall not go hungry. We didn’t even make it to the highway before pulling over for a potty break…and come out with a dozen donuts and more bagels. Awesome, my kind of road trip.
It was raining most of the day, though we still enjoyed the views driving through Shenandoah. This was really the most green I’ve seen since last summer, it’s nice to have clawed our way out of the bowels of winter so quickly. 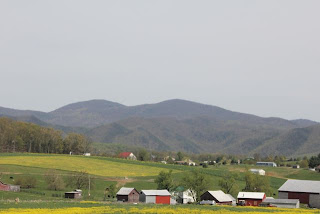 Unfortunately it was still raining lightly when we made it to the site, the unfortunate part being that it was in the low 40s and getting dark. We pulled up just in time for the pre-race briefing, ala Horton. My first impressions of the man were pretty consistent with the stories I’d been told. He stood in the center of a large crowd of people jammed under a pavilion berating new and old runners, throwing things at people, and being generally curmudgeonly in a comedic fashion. At one point he tossed a “gift” to one of his volunteers (who is a student of his at Liberty University) and as she pulled a shirt out of the bag he threw, her boyfriend stepped forward on one knee when she unrolled it to discover “Will You Marry Me?” in large bold letters across the front. The crowd broke in to applause, hooting and hollering as she said yes. Her boyfriend ripped open his jacket to reveal a matching shirt that said “She Said YES!”.  Clearly this was going to be one unforgettable race.
After the pre-race brief (which was short to the tune of: Don’t get lost, if you get lost you’re a complete idiot), a bonfire was started as people stood out in the gently misting (but still quite cold) drizzle. I picked up my bib number which had me seeded as 4th female (Ragan as 3rd), and as I was walking away heart a loud “Amy Lane…where are you, Amy Lane?”. As I acknowledged my name and saw Horton head in my direction, I could only hope that he didn’t already have a reason to pick on me. He slapped me on the back and said he expected a fast race out of me, and moved on to his next victim with a big grin on his face.
Our caravan went off to set up our tents and get everything settled before it was completely dark. Ragan was sweet to help me with mine, as I kept falling over and being assaulted by tent poles (hey, it was NOT a one person tent).  We finally got situated and grabbed some dinner, which was about 100 boxes of pizza and dozens of desserts. I brought my own chicken and pasta, I wasn’t feeling too confident with eating loads of cheese the night before a race.

A nice bonfire was was keeping people somewhat warm in spite of the cold drizzle. If only I enjoyed eating soggy marshmallows... 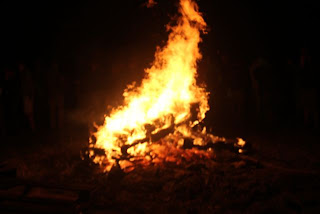 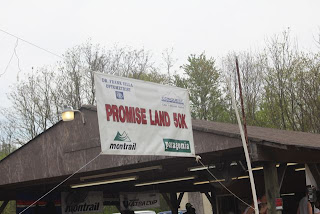 The rest of the afternoon (well, before the long haul back home) was a great, social BBQ while watching runners come through the finish. Everyone was grinning ear to ear at having overcome 34 miles of Horton Land. Funny thing, these ultras are. I could go on and on about the post-race ambiance, but as I’m over 3,000 words already it’s time to dismiss the class.
What a day! I’ll be back :) 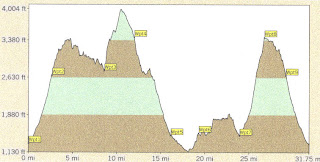 Posted by AgileToes at 8:37 PM