It’s hard to be anything but ecstatic with an 8 minute PR.  With that, I begin my not terribly epic and usually long-winded race recap.
I’ve dubbed myself an honorary NorCal "local" racer, as I realized I’ve crossed the country 3 times in the past year to toe the line for a marathon. What can I say? California has a lot of good stuff going on.
Friday was a nightmare logistically between the 3 hours of sleep and 6 hour plane ride, with a bunch of rather boring complications at the airport and rental company. Needless to say I was relieved when I finally made it to my host’s house in Santa Rosa that afternoon. Carrie (my lovely hostess) had been gearing up for Napa before plaguing herself with injury from a very serious round of Dance Dance Revolotion with her energetic daughters. So yes, even video games are off limits during taper.
Expo:
I was completely exhausted all day Friday and was pretty terrible company for Carrie on the hour-long commute to Napa. Enjoying the passing scenery through my groggy eyes was enough to get me excited about running in wine country in spite of the sleep deprivation. We arrived at the expo at 6pm as the website claimed you could pick up your bib until 8pm, and were rather confused by the rude and unaccommodating volunteers. They apparently closed at 6, though did not seem to realize there was conflicting information on their website. A few of the volunteers were very nice and helped us get our bib, but as we stood there a woman sneered that they were locking the doors as soon as they (meaning us) left. She was also pretty unhelpful when we asked about parking at the start, and pointed out that since there will be thousands of family members who want to watch their loved ones start, we should take a bus instead. Screw it. We went to pick up our much-coveted duffel bags and shirts, but were surprised to find the shirt people already gone. When we asked a volunteer about it they said everyone left at 6. I  was baffled, it was 6:05. Were they really in that much of a hurry to leave when they saw runners coming in to the expo at 6? The volunteer told us to come back the following day during expo hours, and I said that wouldn’t be possible as we were an hour’s drive away. They said “sorry, but we’ve been here all day. We’re tired and want to leave”. WHAT?!!! I flipped out. I was exhausted, hungry, worn out,…and I tried very hard to calmly explain that as I had paid for my shirt, flown all the way across the country, drove for hours to make it to the expo, it would be nice if they could spend 60 seconds getting me a flipping shirt. Ugh. Anyways, I’ve never felt so unwanted at an expo before. Very disappointing.
Pre-race dinner
As usual, the gang met up for some pasta for some solid carbs and conversation.
Race Day:
After a good 6 hours of sleep I woke up a few minutes before my alarm at 4:40. I was feeling pretty calm in spite of the rain pounding against the window, determining to mess with my head. I knew that had definitely improved since the last marathon (Chicago), but the mileage thing was still a concern for me. I ran an unimpressive 185 miles in Dec., 198 in Jan, and 207 in Feb. By far my lowest mileage to date for a marathon. Nevertheless, I was ready to rock ‘n roll.
We drove through the rain to the start with a short pit-stop on the way. By the time we parked and walked to the start area we both had to pee again. Carrie was pretty sure she wasn’t going to be able to race because of her leg, but she wanted to at least start and see if it would be manageable to run easy.
We stood in the warm rain in one of many super-long lines and at 10 minutes til the start of the race were still pretty far back in the line. We took off for a little hill on the side of the road where men and women alike were pissing in the grass. I was thankful for a long garbage bag to give me a little privacy. The things we do for races…
Carrie was awesome and supportive and took my bag to the drop with only 8 minutes to spare. She knew I was getting antsy as I was gunning for a PR, and she still had no idea if she was even running. Bless you, Carrie.
I pushed my way through the crowd to get up to the front, not wanting to get boxed in by anyone. I don’t know why it still surprises me to see people who clearly aren’t “fast” standing about 3 feet behind the line. 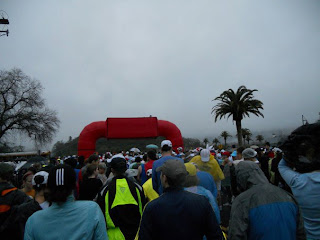 I was tempted to tell the overweight guy standing in front of me that I would likely run him over if he didn’t go out at a 7:00 pace or faster. Before the gun went off  I met Guillame, which was fun. I was expecting to see Jim & James, but never did. I figured Jim was staying further back to be conservative and James was likely peddling a bagel off of an unsuspecting bystander. I did however see Ian Sharman, who re-claimed his world record for the fastest marathon in a costume (and who is also amongst the best of ultra-runners today). I should probably mention by now that it was raining steady, but with temps in the 50s it felt absolutely fine. I wore my Endurasoak singlet and cheap cotton gloves, which was just perfect. The gun went off and true to my prediction I was frustrated by the posers who had no business being at the front of the race. I told myself to calm down and skirted my way around everyone, and quickly fell in to a rhythm. It was hard holding back, as my legs were itching to go and we had a slight downhill. My plan was to average 7:00s, but with all of the slight hills I knew my watch would probably never actually say 7:00. Easy on the up, relaxed on the downs. Seemed like a comprehensive plan…. 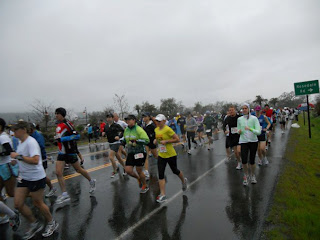 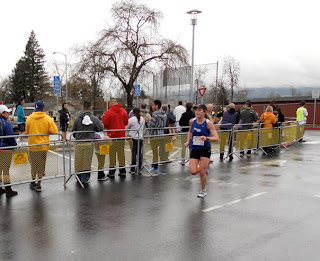